Hydrogen bonding is an interaction between hydrogen atom bound to electronegative atoms in a molecule, such as oxygen, nitrogen, fluorine. This is typically a weak interaction, especially when separation is performed in aqueous solutions. Liquid chromatography techniques evolved as tool for separation of different molecules based on their physico-chemical properties.

Why should I buy Shark HPLC Columns?

SHARC 1 is the first column specifically design to perform a separation based entirely on the interaction of the molecules capable providing hydrogen atom (donor) or attract hydrogen atom (acceptor) to the stationary phase with special properties.

SHARC 1 column operation conditions are unique. A mixture of acetonitrile (MeCN), a weak solvent, and methanol (MeOH), a strong solvent, are used as the mobile phase. Pure MeCN has very insignificant amount of hydrogen bonding with the SHARC stationary phase, while MeOH interacts strongly with SHARC stationary phase, which reduces the retention of analytes based on it’s capacity to hydrogen bond. By changing ratio of MeCN/MeOH the optimum retention profile can be obtained for many types of molecules with high selectivity, peak shape, efficiency, and speed.

Hydrogen bonding energy is usually in range of 30 kJ/mol or less and depends strongly on the nature of the functional groups and their orientation within the molecule. This energy difference is the basis for selectivity of the interaction between the stationary phase and the molecule of different structure and chemical characteristics.

A given molecule can retain on the stationary phase with more than one hydrogen bond, while also performing as a donor or acceptor of a hydrogen atom. 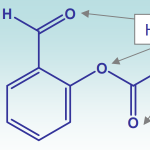 Presence of a polarized hydrogen atom is not always enough to observe retention by hydrogen bond mechanism. Sometimes a compound can form intramolecular interactions, as oppose to intermolecular hydrogen bonding, and does not participate in stationary phase interaction.

MeCN/MeOH mixture has 2-3 times lower viscosity than water/MeOH or water/MeCN mixture (fig. 5). As result smaller particles for column packing can be used without increasing the working pressure. UPLC-like conditions can be easily obtained on regular HPLC instrument with 2-3 times higher velocity with a shorter column with small particles. This can increase the speed of analysis up to 5 times. Using UPLC (RRLC, UHPLC) equipment allows to increase speed of analysis by another factor of 5 or 6.

Since hydrogen bonds formation is very specific in the interaction energy and strongly depends on molecule geometry, number of functional groups and the position of the functional groups, the selectivity of resolution of molecule of similar nature such as isomers, related impurities, product of oxidation or reduction can be achieved with SHARC separation very efficiently.

MeCN/MeOH mixture has low boiling point and much easier to evaporate than water. As result this solvent system is much friendlier for preparative type chromatography. The additional benefit of low viscosity allows SHARC to perform prep separation with higher throughput. This mobile system is MS friendly and allows implementation of MS-driven sample collection. In most cases isocratic method can be used due to high selectivity of the column which allows to recycle most of the mobile phase minimizing solvent consumption.

Wide range of molecules can be analyzed with SHARC technique. Practically any molecule with functional group which contains oxygen and nitrogen can be retained and separate from similar compounds in this technology. Hydrocarbons is one class of compounds that will be retained poorly in this system, but they are typically well separated in reverse phase HPLC or GC.